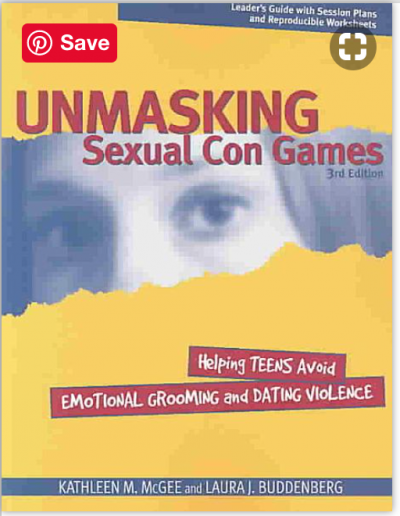 “What’s the big deal? Everybody does it.”

Language can be a powerful persuader. The term “con game” (confidence game) is defined as a swindle in which a person is defrauded after his or her confidence has been won.

When someone is tricked into a sexual encounter by what another person says, it is called a “sexual con game.” Anyone who is coerced into a sexual experience has been defrauded both emotionally and physically.

Unmasking Sexual Con Games, Helping Teens Avoid Emotional Grooming and Dating Violence by Kathleen McGee and Laura Buddenberg examines the kinds of words and behaviors that can be used to seduce, trick, or force teenagers into a sexual relationship. The more educated and aware our youth are about sexual con games, the more they will be able to “unmask” and avoid the con artist.

Depending on the context, the con artist can also be referred to as a “perpetrator,” “predator,” “player,” or “groomer.” Other slang terms include “pimp,” “G man,” “mac daddy,” and so on. There may be differences in the intensity of the physical or emotional relationship, but all con artists are guilty of creating coercive relationships. Some con artists knowingly manipulate and convince others to engage in sex. Some simply mimic the actions of role models they have seen and are unaware of what healthy relationships are.

“I’ve been sexually harassed for almost three years. One guy kept trying to feel me up and go down my pants in class. It breaks down your soul and brings you down mentally and physically.”

Another 14-year-old in Illinois wrote:

“My harassment came from one boy. Constantly. He was really into smacking my bottom, among other things, and always asking me to go to bed with him. I didn’t want to go to school.”